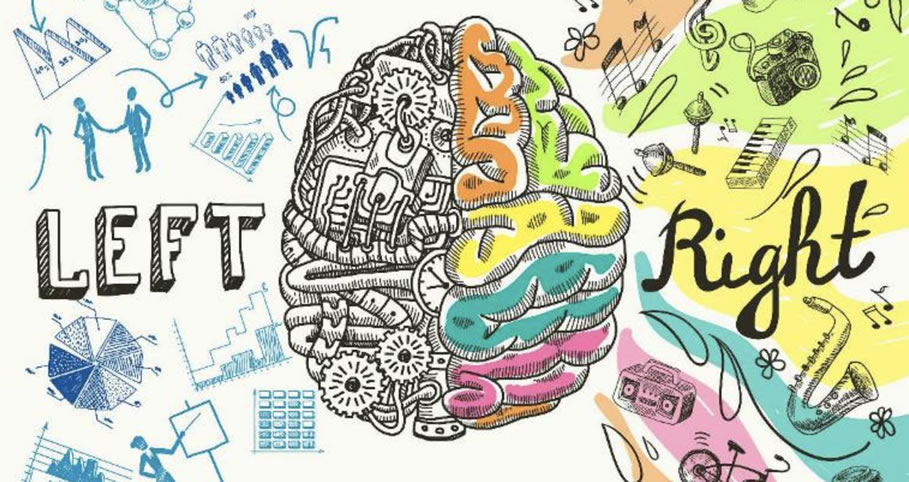 This is a slightly extended version of Example 1 of the usefulness of the concept of core cognition that we gave of in the application section called “Human Cognition from Life” in our 2015 paper called Cognition from Life (page 11). It develops a connection with Iain McGilchrist’s seminal work on the divide brain.

Two Attitudes Toward the World and Two Brain Hemispheres

In Learning Autonomy (Andringa et al., 2013) we observed that successful life span development is characterized by an ever-improving understanding of reality in combination with an urge (and proven ability) to improve and shape the Umwelt. This fits the description of the co-creation mode that we coupled to the “prevention of problems, consolidation after repletion, and – as much as possible – the creation and maintenance of a safe and sustaining environment with long-term need satisfaction potential.” In Learning Autonomy we interpreted cognitive development (in humans and human-like artificial agents) as learning to master the complexity of the world.

Life is always near the ‘edge of chaos’ (Mora and Bialek, 2011) and if the complexity of the current situation is judged too high we benefit from coping strategies that reduce its complexity and make the situation more tractable and predictable. In Learning Autonomy we referred to the form of cognition that allows us to curtail a complex world as “cognition for order,” “cognition for certainty,” or “control cognition.” We associated this form of cognition with fear and anxiety, detachment, abstract manipulation, and the personality trait ‘closed to experience.’ This description matches with the concepts that we used to describe the coping mode: ‘trying to control the situation,’ ‘reactive problem solving,’ ‘conservation of the essential,’ ‘short-term utility for self-preservation,’ and ‘acceptance of adverse side effects.’ 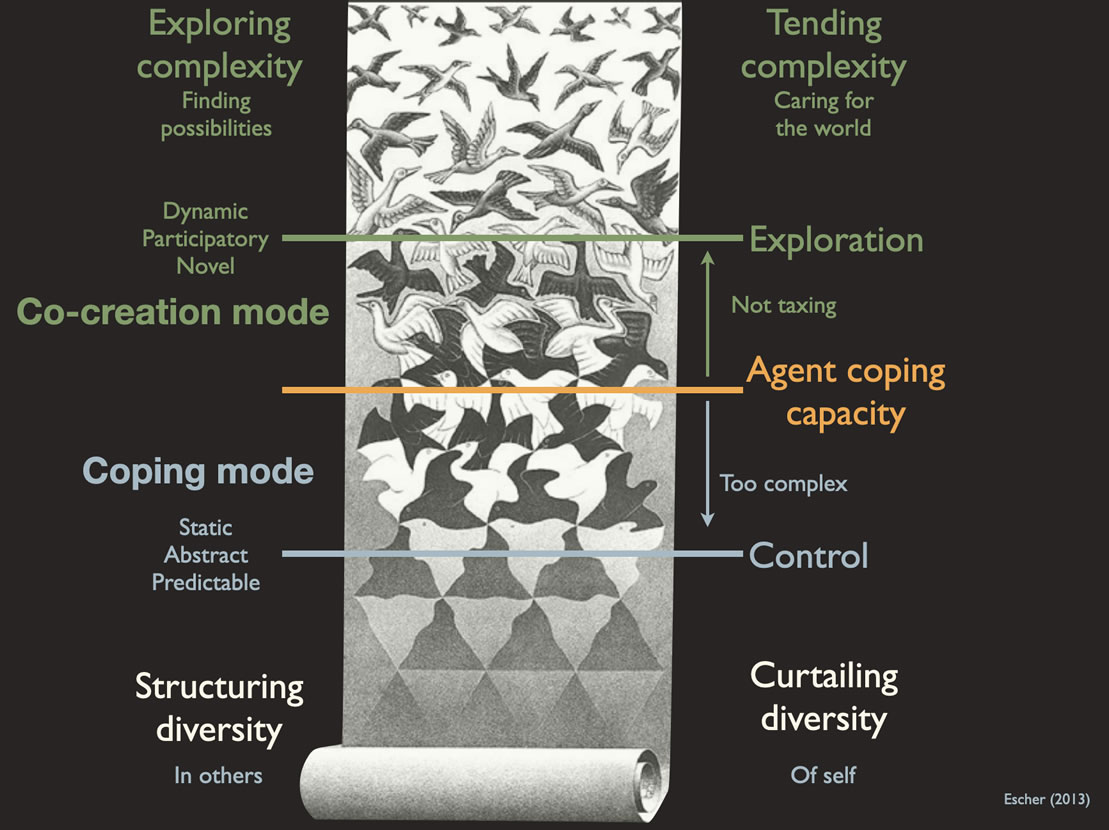 Yet at other moments we can deal with some additional complexity and allow ourselves to explore the possibilities of the world. Successful, typically playful and purposeless, exploration leads to the discovery of new, generic or invariant structures that make the world a bit more tractable and accessible to agentic influences. This expansion of the understanding of the world fits with the holistic nature of the co-creation mode.

In Learning Autonomy we observed that the two modes we identified matched the description of differences in the way the left and right cerebral hemispheres understand the world and contribute to our existence according to the seminal work “The Master and His Emissary” by McGilchrist (2010). Table 1 of Learning Autonomy provides an comprehensive summary of the reported differences between (and complementarity of) the atti- tudes toward the world associated with the left and the right hemispheres that exemplifies how the coping and the co-creation modes are implemented in modern humanity (and in particular the brains of human individuals).

McGilchrist (2010) argues that our Western societies have become characterized by an ever growing dominance of the left-hemispheric – coping – world-view that favors a narrow focus over the broader picture, specialists over generalists, fragmentation over unification, knowledge and intelligence over experience and wisdom, technical objects over living entities, control over growth and flourishing, and dependence over autonomy. Apparently, despite the huge cultural progress that has been made in the last millennia, humanity shifted more and more toward the coping mode. According to the summary in Figure 1 this is a neither a sign of autopoietic success, nor of viability: on the contrary. Apparently, our understanding of society has not matched society’s complexity growth.

This erosion of the co-creation mode of cognition, and, directly coupled, the resilience reduction of our natural environment, may in fact explain why humanity faces a number of existential problems and in particular has difficulties in realizing a sustainable long-term future: the coping mode, with a focus on pressing problems, intolerance to diversity, and its insensitivity to adverse side-effects as key characteristics, is simply unsuitable to setup the conditions for easy and reliable future need satisfaction.

In McGilchrist’s formulation the right hemisphere is the master and the left hemisphere the servant to be assigned with specific tasks. 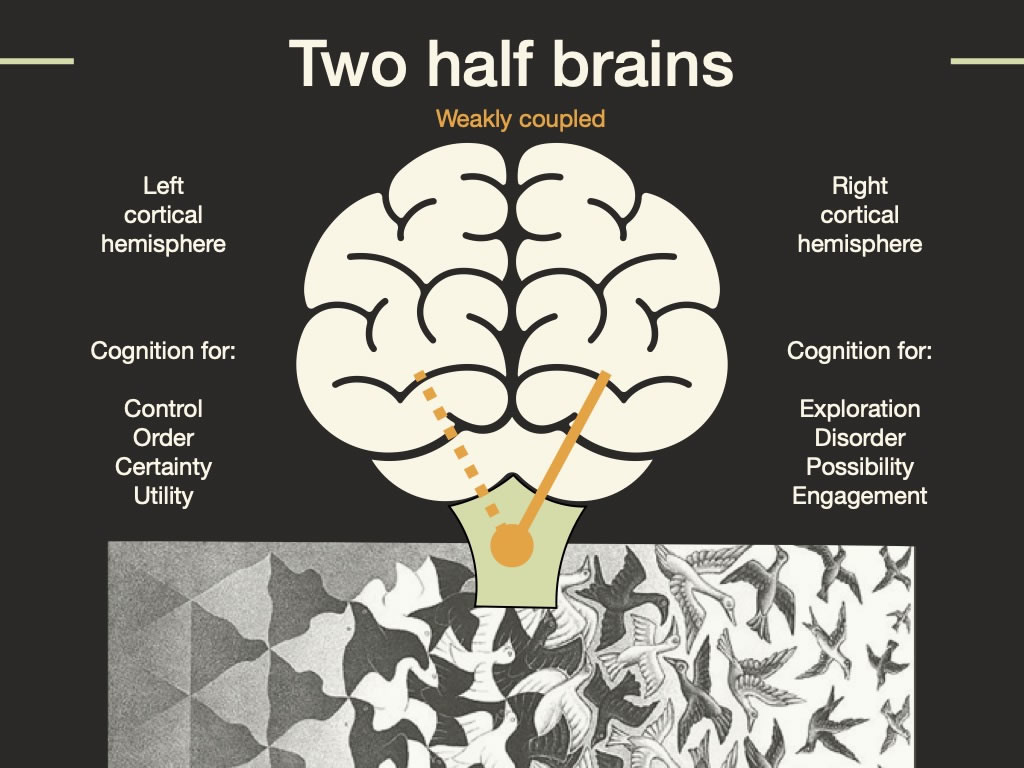 In the core cognition framework the switch is one between cognition for control, order, certainty, and utility essential when the stakes are high, and cognition for exploration, disorder, possibility, and engagement.